How I Embraced Being A Mother and A Business Woman 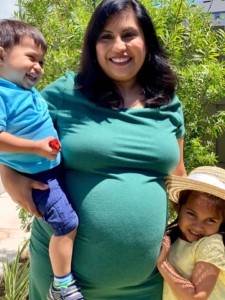 With my little shorties

What’s the first thing people ask you when you meet them for the first time?

After your name, it’s usually some form of “What do you do?”

Though we may do lots of things and there are many facets to our personality and souls, we all know what they mean.

What do we do for work?

For so long, our identity had been defined and measured by what we do for money.

Since I was a child, my mind was made up to go to college and be a professional woman. I was ambitious and knew that working hard in school would be my best chance to earning scholarships to pay for college. I loved school, was involved in extracurriculars, and dreamt of having my own magazine.

I ended up studying Journalism in college and met my future husband there when I was just 19. After college, I worked as a newspaper reporter, magazine editor, tech writer, marketing manager, PR practitioner and freelance writer – getting a Master’s in Entrepreneurship along the way.

At 29, I married my college sweetheart and started a digital marketing agency with a business partner. About a year and a half later, I discovered I was pregnant with my first child. Aside from close friends, I had never really spoken to anyone about wanting to have kids one day. I knew it was something I wanted, I just wanted other things first.

Though I had just gotten married, my parents were shocked when they learned that I was pregnant. This was funny to me …. I mean, once you get married, if you are open to having kids, usually that is the next natural step. I was older, had my master’s degree, we owned our house, I had a company … of course this was next.

But because I never spoke much about being a mom, I guess they didn’t think I wanted any children. But I always saw myself as a mother one day. I deeply wanted children. Just as much as I truly enjoyed working, I knew I wanted it all. Kids and a career.

As I prepared to tell my clients and work colleagues about the news, I decided to wait as long as possible. I knew that too often Corporate America and the business community views pregnancy as an obstacle in a woman’s career. They think that a mother won’t be as dedicated to her work, as available, as focused, etc.

I was scared to tell anyone about my first pregnancy. I didn’t want them to write me off or view me differently. But when I finally broke the news, I know that everything changed. I saw the micro expressions in their faces and heard the inflection in their voices. When I told one woman colleague, she was shocked. “You’re how far along? I would have never known. You’ve been so professional,” she complimented.

I was grateful for the sentiment, but I kept replaying her words in my mind. Does being a pregnant woman mean you can’t also be professional?

I knew it wasn’t true. But perception is reality, and unfortunately, that’s how some people view pregnant women.

I was learning the unspoken rules of the game. Though your body is going through incredible changes, you must still play your role. What no one dare say aloud is that you must work even harder to overcompensate and fight against their perception of you as a pregnant woman. You can’t show your cards. You can’t complain. You can’t show weakness. It will be held against you, I learned. Wrong? Of course. But that’s what I felt I had to do.

During the last few weeks of my first pregnancy, I was big as a house, I didn’t realize how I looked to other people. I was still the same “me” in my mind. I was working at a feverish pace, trying to get everything done before my due date, and still trying to wheel and deal until the very end. Yet people took one look at my big belly and must of thought, “Oh my goodness, what is she doing? This mama needs to sit down!” During the crazy hectic days, their expressions reminded me of my condition.

The day before I gave birth to my first child, I worked until 6 p.m. that evening. I got home from work at 7 p.m. and my water broke at 7 a.m. in the next morning.

I thought I had to downplay the fact that I was a mom in order to preserve my business brand. When I returned to work, I didn’t keep any photos of my family in my office, only as the screensaver on my smartphone. I tried to avoid talking about my kids unless a client first brought it up. It simply didn’t feel safe. I wanted clients to first judge me on my work and ideas, not pre-judge me because I volunteered the fact that I was a mom.

I once read a quote that said that society wants mothers to work like they aren’t moms, and mother like they don’t work. It’s an unforgiving world. In business, you’re supposed to act as if your life revolves around work, like there’s nothing that comes before it in order to appear dedicated and deserving of opportunities.

This same fear didn’t stop after I changed course and began working for myself again at home a few years later. If I needed to have a conference call, I jumped through major hoops to make sure my kids weren’t home at the time. I was terrified of them making noise during a call. I didn’t want to seem unfocused or unprofessional. I tried desperately to keep working at the same intensity I did in my late 20s as a single woman though I was now a wife and mother.

Today I follow an online business personality from Texas who happens to be a dad who runs his empire from his home office while keeping two little boys at home. In one podcast, he speaks about how he structures his day and the fact that he unapologetically tells his clients that his boys are home with him, they may hear them playing in the background, and in essence, they are part of the package of working with him – take it or leave it.

And he doesn’t appear to lose a wink of sleep about this. He is simply confident in his abilities and in the results that he gets for his clients; he refuses to downplay the fact that he is also a parent.

How is he able to express this truth? Is it because he’s a man? Maybe. Maybe not.

I felt all this pressure to downplay my parenthood, and he wears it publicly as a cape.

Today, I have finally embraced my motherhood in all of its glory. I have a 5-year-old, a 2-year-old, have endured two miscarriages, and am now pregnant with my third child due in June.

Motherhood is part of my soul and complete identity.

I still get comments from well-meaning people. I was at a women’s award ceremony a few months ago and a woman I hadn’t seen in a while told me, “Oh my goodness, every time I see you, you’re pregnant again!” I smiled. Maybe it’s true. I have been pregnant quite a few times in the last five years. But her tone really made me think, “What are you trying to say? I’m octomom?”

Being a mom has been the most rewarding job of my life and I’m grateful for every part of it. I have finally accepted it as a part of my whole self and I’m now unafraid of showing it.