Previous Next
Perfect in Platinum 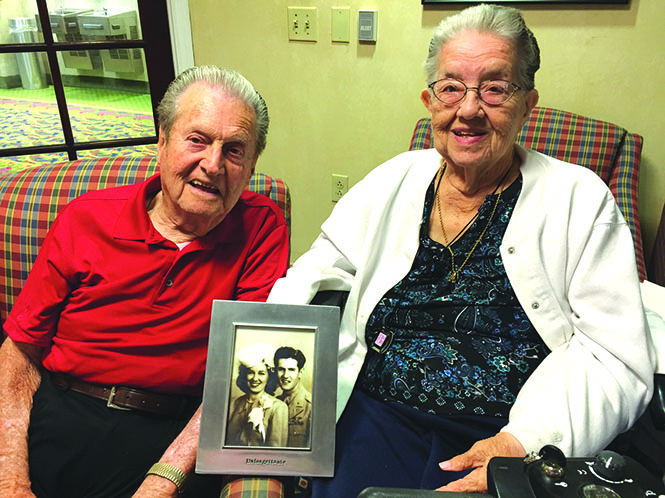 She was a high-school junior, and he was a sophomore, but it just didn’t matter. Bill Richardson pined for the beautiful and popular Ernestine Wamble, and it was only a matter of time before he made a move to win her heart.

His courage was well worth it because their love endured far beyond those confusing teen years. In fact, Bill and Ernestine Richardson witnessed tremendous moments in history together. The space program, several major wars, the assassinations of President John F. Kennedy and Dr. Martin Luther King, Jr., Tiananmen Square, 9/11 – the Richardsons have observed it all hand-in-hand.

Bill and Ernestine’s love story began when they were still students at Mainland High School in Daytona beach.

“She was a year ahead of me, was crowned Homecoming Queen, and was inducted into the honor society,” Bill recalls. “I had several girlfriends, but I had my eye on her for a long time. It took a while for me to become brave enough to ask her for a date.”

While Bill was immediately smitten, it took Ernestine a little more time to reciprocate.

“I wouldn’t say I disliked him, but I didn’t like him right away,” Ernestine says matter-of-factly.

But Bill would not be deterred. It wasn’t long before he won her over, and they made it official.

“We would go to the movies a lot,” Ernestine says of their courtship. “Bill worked as an usher in the theater and would let me in free.”

Into the Wild Blue Yonder

After high school, Bill was drafted to serve in World War II and joined the Air Force as a pilot. At 19, he was assigned to fly a North American B-25 Mitchell bomber over the Pacific.

“We flew to New Guinea for practice runs, and then flew over the Philippines, then the South China coast, and Formosa during combat,” Bill says.

Bill began his service in 1943, and though the war ended in 1945, he served in peacekeeping roles until finally coming home in March 1946. During this time, he and Ernestine wrote letters daily to communicate.

It was through these letters that the couple began to discuss getting married. Bill knew it would be soon, but he didn’t realize how soon.

“When I got home, Ernestine told me, ‘We’re all set. We’re getting married in two weeks,’” Bill says. “I had no job, no car, and no money. How were we going to get married?”

But love has a way of working out.

“Bill had to get permission from his parents because he was just 20 years old,” Ernestine says with a grin. “I was 21 already.”

The couple honeymooned in North Carolina for 10 days before returning home to Daytona. They lived with their parents before finding a cozy garage apartment across from Ernestine’s father’s service station.

Bill knew the local postmaster and got a job working at the post office. Three years later, the couple welcomed their first child, Marty, and later a daughter, Candy, in Jacksonville. Their youngest son, Scott, was born in Ocala.

“After the post office, I began to work for Life Insurance Company of Georgia,” says Bill. “As I earned promotions, I had to move around a bit.”

The family spent several years in Homestead, where all three kids graduated high school. Right after Scottgraduated, Bill was transferred to Central Florida.

Upon arriving in the Orlando area in 1975, a friend encouraged the Richardsons to check out a new, upscale community called Tuscawilla.

“At that time, Winter Springs was all woods,” Bill recalls. “Red Bug Lake Road was only two lanes, and there was one blinking light. When we finally got a 7-Eleven out there, it was big news.”

The Richardsons immediately got involved in their new city. After initially attending services at First BaptistChurch of Winter Park, they joined with a few other families to form the original members of First Baptist ofTuskawilla. They also joined Tuscawilla Country Club, where Bill volunteered as an ambassador.

In 1981, after retiring from Life of Georgia, Bill wasn’t ready to take it easy. He decided to open an insurance agency as a family business in Casselberry. Bill worked at the agency until he was 88. Bill and Ernestine’ssons Scott and Marty and grandson Sean still work there.

These days, Bill and Ernestine are finally relaxing a bit in a beautiful senior living community in Sanford, where they challenge their friends to nickel bingo.

So, what’s the secret to 70 years of marriage?

“She minds everything I say!” Bill says, flashing a smile while Ernestine just shakes her head. “The truth is we just really get along. We communicate and don’t hold anything back.”